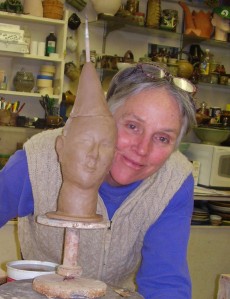 Kathy Clarke
Kathy Clarke has over 25 years of experience with clay; both as a working artist and instructor of children and adults. Most of her pottery education has come through master-level workshops and instruction from resident potters at Frog Hollow Craft Center. She believes that handmade objects can have a positive impact on people’s lives…that the “love of making” can be mysteriously injected into the piece and stays there for centuries.

received a B.S. in Studio Art and a M.A. in Art Education from New York University. In New York City, she taught middle and high school at The Dalton School and then The Chapin School. Also, she taught adult drawing for The Dalton Evening Arts

Program and the Saturday Children’s Drawing Workshop at the National Academy Museum and School. In Vermont, she has taught art to all ages in a variety of venues including Frog Hollow, public and independent schools, and Middlebury Studio School. Her paintings have been exhibited in New York, New Jersey, Montana, China and Vermont.
http://marymckaylower.com/work.html

Susan Shannon
has played in the mud her entire life. She’s learned from many teachers over the last 25+ years and currently works as a studio artist. The potter’s wheel has always been her favorite way to spin delight into the heart of every pot. And now, she gets to share her knowledge with others. You can see more of her work at www.suchipottery.com

Barbara Nelson
has been a professional jeweler for more than 34 years. After working for many years as Education Coordinator and jewelry instructor at Frog Hollow Craft Center, she helped to found The Middlebury Studio School.

Catherine Mangold’s pottery journey started in high school but she put the wheel aside to work as a journalist. From 1980 to 2000 she moved around the world covering wars, environmental degradation, politics and international relations for The New York Times, Newsweek and the Philadelphia Inquirer. For her, the joy of creativity was evident in every corner of the globe, like an engine forever humming in the background. She answered the call of that hum herself in 2010 while teaching and writing her second book. Putting her hands back in clay after such a long absence felt like a homecoming. She has been with MSS since 2014. Catherine’s interest in porcelain, glazes and functional forms results in stunning art work.
You can see more of her work at Bridporthill.com

Stacey Stanhope
received her Masters degree in Ceramics from Wichita State University in 1995. She is the co-founder of Clay Fetish Pottery in Alpharetta, GA. In 2009 Stacey moved to Orwell, Vermont

Award winning Artist Sean Dye, received his MFA from Pratt Institute. He teaches painting at the University of Vermont, conducts popular workshops throughout North America. His work has appeared in The Artists Magazine, Pastel Artist International, International Artist, and The Pastel Journal. He is a member of Pastel Society of America and Vermont Pastel Society (founder) and has judged several import exhibitions. His works hang in many private and corporate collections as well as commercial galleries. His wrote The Mixed-Media Sourcebook and Painting with Water Soluble Oils. Many of his paintings are featured in Caroline Jasper’s book Powercolor. His work also appears in North Light’s book Painting the Elements: Weather Effects in Oil, Acrylic and Watercolor. Look for his DVD’s, Palette Knife Landscape and Sean Dye’s Easy Steps to Oil Painting. He released a new series of DVD’s in 2014 on Pastel and Mixed-media. In November he opened Sean Dye Studio and Gallery in downtown Vergennes.

Learn photography from a professional with over 45 years in the photography business. Mike moved to Vermont with his wife Jamie just over a year ago from Crofton, Maryland where he spent the last 26 years.

Mikes career in photography began in 1975 after leaving the Air Force. During the time since then he has photographed everything from weddings and portraits, to presidential inaugurations, Olympic games, sporting events, art photography, street photography and many other events.

Over half of his photographic career Mike worked for Canon U.S.A, Inc, first as a sales representative to the photographic retail industry and for his last 12 1/2 years with Canon’s Government Marketing Division in charge nationally of government sales of all photographic, video and visual communication equipment.

His may years in the photographic industry brings a wealth of knowledge for photographers of all levels to learn from. He has conducted many training seminars to a wide variety of end users covering many different disciplines of photography. Mike also judged imagery for numerous photography clubs throughout the Washington, DC, Annapolis and Baltimore region!

Lois Thompson
Lois is a retired Art Teacher from Bristol, VT . She is a graduate of Rhode Island School of Design as a Pottery major.